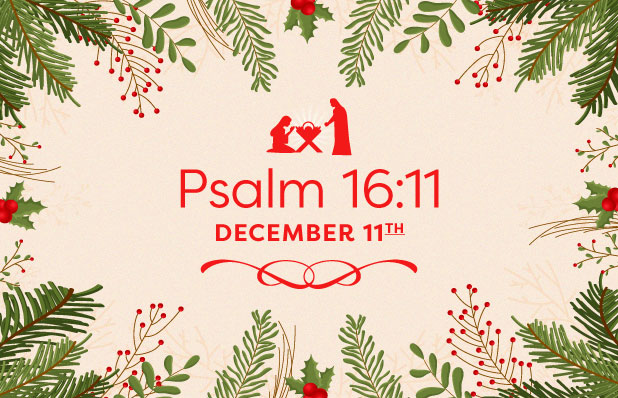 You make known to me the path of life; in your presence there is fullness of joy; at your right hand are pleasures forevermore. - Psalm 16:11

God’s people entered the Promised Land and were given a king who was supposed to rule over them as a nation according to God’s law. The greatest of their kings was named David. He was genuinely devoted to the LORD and wanted to upgrade God’s dwelling place from a mobile tent to a permanent house. But the LORD made a covenant with him and promised to build up David’s house instead. He promised to bless David during his lifetime and to bless his lineage with an eternal kingdom and throne.

David trusted that when the LORD said something would happen, it was as good as done. He reflected often on his promise to provide an anointed son to him who would take dominion over the earth forever. Some of his reflections are preserved for us in the book of Psalms. In Psalm 16, King David anticipated living joyfully forever in the presence of God.

Jesus is the eternal Son of God who was born in the line of David. He died, was buried, resurrected, and ascended to the right hand of God the Father. Because Jesus lives forever, he can reign forever. And united with Jesus by faith, we too can anticipate passing into the presence of God where there are pleasures forevermore. Praise God for faithfully and patiently unfolding his eternal plan of redemption! Keep this in mind when you see the Son of David, the King of Kings, in the manger.