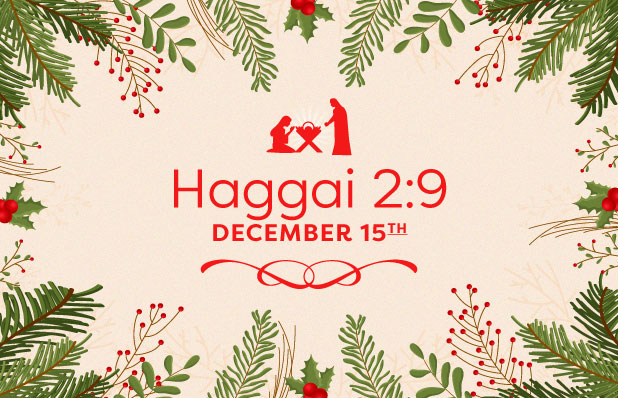 God's glorious presence had left the temple. His people were scattered from their land and lived as exiles under the rule of pagan nations. Things seemed bleak. But in 538 B.C., the Jews were allowed to return to Jerusalem to rebuild the temple. A prophet named Haggai was called and appointed to encourage the people in their work of restoring God’s broken-down house.

Haggai reminded Israel of the LORD’s past faithfulness in calling them out of Egypt and of his present presence among them by his Spirit. They longed to see God’s presence fill the rebuilt temple as he had before. Upon its completion, God’s glory didn't fill it as expected. But through Haggai, God promised that one day his glory would return to the temple and he would give peace there. He didn’t give explicit details about when or how that would happen. It’s one of the cliff-hangers at the end of the Old Testament.

More than 500 years later, Haggai’s prophecy became clear. At Jesus’ birth, angels sang of God’s glory bringing peace on earth. And when Emmanuel was presented at the temple, a righteous man named Simeon recognized that the glory of God had finally returned. God’s redemptive promises are filled in ways that are often beyond our greatest expectations. His infinitely glorious presence returned to the temple in humble human form.

Song: Go Tell It On the Mountain