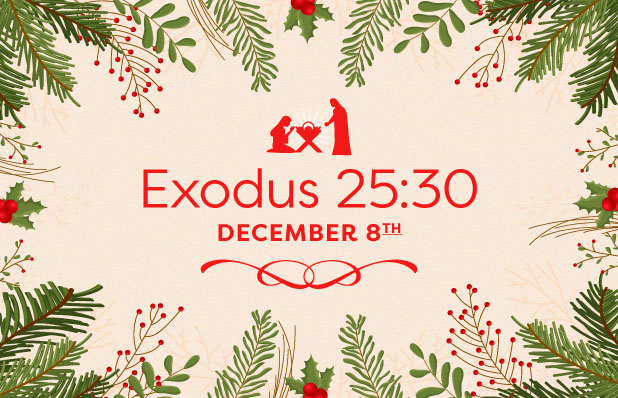 And you shall set the bread of the Presence on the table before me regularly. - Exodus 25:30

Now that Abraham's descendants had grown into a great number, the LORD redeemed them out of Egypt so that they could rightly worship the one true living God. Now they could begin to be a blessing to the surrounding nations. To do that, they would need to obey God’s perfect will from the heart in the way that Adam did not. They were to be a holy nation, devoted to him and guided by his law. So before they entered the Promised Land, they covenanted with the LORD that he alone would be their God and they would be his special, treasured people.

Due to the fallen nature of humanity, Israel failed to live up to the righteous standards that his law prescribed. Their iniquities separated them from God. But in his grace, the LORD made a way. He appointed a sacrificial system to atone for their sin so that he could dwell among them again. One of the sacrifices was called the bread of the Presence. Twelve loaves were offered on a golden table in the tabernacle to represent the twelve tribes of Israel in God’s presence. God then gave the bread to the priests to sustain them.

Jesus declared that he is the True Bread that comes from God’s presence in heaven. He came in the flesh to offer his body as bread to save and sustain his people. It's another tangible reminder that as God’s people dwell in his presence he provides for and sustains them.