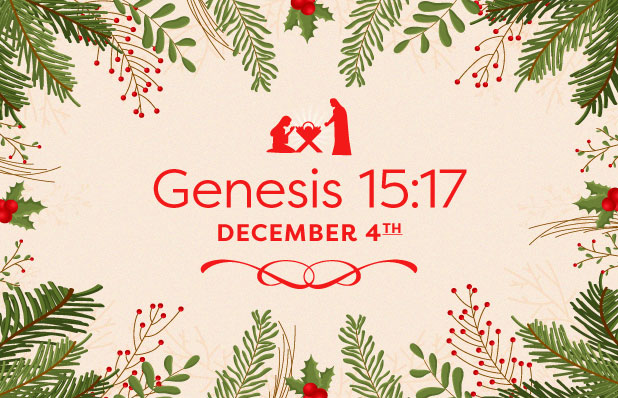 When the sun had gone down and it was dark, behold, a smoking fire pot and a flaming torch passed between these pieces. - Genesis 15:17

Adam and Eve's sin brought death. The vital relation between man and our Creator was broken and they were exiled from God’s presence in the Garden of Eden. Much of the rest of the storyline of Scripture traces out how the relational rift between God and man might be restored. Noah was chosen as a new “Adam” to be a fresh start in a wicked world. But just like Adam, he fell into sin and the curse continued.

Many generations later, a man named Abram was called as another “Adam.” God promised to make him into a great nation in a special homeland with descendants as numerous as the stars in the sky. To assure him of these promises, God cut a “covenant” with Abram. The covenant would formalize the relationship between them. In a symbolic ceremony, God appeared in the form of a blazing torch, passing between pieces of sacrificed animals. He was expressing that he would never let his promises fail to come to pass.

The Creator of the universe, the holy and righteous God, was willing to graciously condescend to sinful Abram in the dusty, arid Middle-Eastern desert to express his love for his people. It may seem like a strange, obscure event, but God’s covenant with Abraham is the basis for the work of Jesus Christ.

Song: Once in Royal David’s City